In fashion industry, the stream of trend is fast as if someone said it's "in" today but it'll be "out" tomorrow. However, there's always revival. Steteco, which used to be for your dads, is now accepted by young generation.
What is steteco? Steteco is an undergarment, or should I say "midgarment", if there's such a term. Midgarment basically because it is meant to be worn under your pants but above your inner underwear. Steteco is made from "crape cotton," which has ruffled texture that effectively absorbs sweat and cools your body. It also prevents the pants from getting sticky because of sweat. So it's perfect for summer's hot and humid weather like in Japan.
As I mentioned before, it used to be outdated and the color was only white or beige. Then a couple years ago, it returned to the market with more sophisticated styles.

This is the one I have. Very colorful. 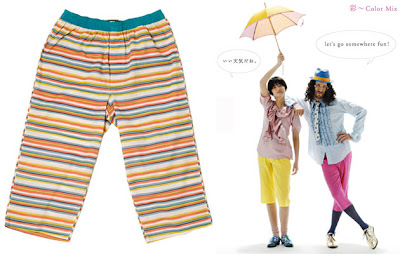 It can be a roomwear or pajama as well. I sometimes go to a supermarket or a convenience store wearing this.

Uniqlo also opened "steteco bar" in Ginza, Tokyo where you can get an advice. They offer 4 types or style with over 80 cute color designs, which is about ten times compared to the last year, in 10 countries. I checked the US site but there are just a few so I think they will update soon.

Let's beat the heat and get through the summer with steteco!!